So it’s been a few weeks since my last update. I decided I would take time to relax after the half marathon and the relaxing was fun and well worth it. But it’s now on to the next goals.

For the end of 2013 I will continue at my one organized race per month. I have a 5K coming up at the end of this month and a 7.5 miler in November. In December I will finish off the year with one last 5K.

Currently my last goal for 2013 is to run a sub 30 minute 5K. Specifically I would like to hit 28 min. Last week I ran 2 miles in 18 minutes so I feel this goal should be accomplished before the years end.

However now it’s on to the next major running goals. And those will come in 2014.

The first is a Duathlon. Which is a 5K, 15 mile bike ride and one more 5K. I am excited for this because it will involve a lot more training and of different kinds. The running is no issue, but I really look forward to the biking part. Which also reminds me I need to acquire a bike.

After that I am signing up for the Philadelphia Triathlon in June of 2014. Needless to say this will be intense and require the same focus and passion as my half marathon training took. As always I know that training won’t be easy. But I just need to put one foot in front of the other.

I can’t say I’ve read much on training for these events. So I’m not really sure what it entails. But I am looking forward to it and know it will be so much fun!

The craziest thing to me is that it’s already been close to 6 months of active running for me. And by active I mean at least one to two times a week. It’s crazy how it feels like just yesterday I mapped out a journey towards a half marathon. And here I am almost a half year later becoming an active runner.

By the time my triathlon hits it will be an entire year of running!

Again this blog was never about being a world class athlete. Or being some runner that people need to respect. It was about a guy who woke up one day and decided to put one foot in front of another and not stop. And by stringing together a day here and a day there I am completing goals that I would have thought laughable and beyond impossible a year ago.

So now the half marathon is behind me and new challenges await. Much like these past 6 months, it’s going to be a blast!

A little motivational collage I put together 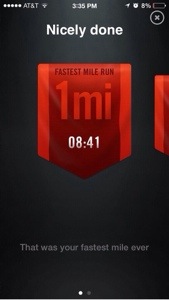