This past weekend I ran the Runner’s World Half and Festival grand slam of races. It included a 3.8 mile trail run, 5K, 10K and Half Marathon over three days. This post is about the amazing weekend I had. If you’d like to read my reviews on each individual race I will link to them, however those reviews will not be a part of this post. Instead I will recap a whirlwind weekend I had, and one of the greatest running activities I have ever had the pleasure of being a part of.

I knew this was going to be a long weekend. After all I agreed to running four different races over a three day period. However about a week or two before the first race I saw that November Project was kicking off the weekend with a 6:30 AM workout on Friday morning. Feeling like I wanted to really embrace the weekend I made the decision to start my weekend at this workout. For those not familiar definitely check out November Project and their awesome movement.

So Friday morning I set my first alarm for 5:15 AM and made my way to Bethlehem for the morning. The workout was an amazing way to kick off the weekend. November Project is such an uplifting and amazing movement. The core of their philosophy (from their own website) is “to motivate and encourage people of all ages, shapes, sizes and fitness levels to get out of their beds and get moving.” I had heard about them a lot in Philadelphia but had never joined a workout. I am very happy I made the decision. It was a great time working out but also being surrounded by so much positivity.

I had known that a few other BibRave pro’s were in town for this race (Angie, Amy and BibRavePro spouse Josh) so I was eager to meet up with them at some point during the weekend. Well, 2 seconds into my first plank I look to my left and there is Josh planking right along side of me. So we say hi, as best you can while planking, and continue our workout. Fast forward a bit later and I see Angie and Amy close by.

Kicking off the weekend at November Project. Amy, Me and Angie.

Another cool thing about the workout is when they asked us to break into groups of three. You grabbed the first two strangers hands you saw (I told you they were all about bonding right?). I ended up in a group with one person who we didn’t realize at the time, but we follow each other on twitter and the second person was a two time Olympian! So needless to say this was an excellent and memorable way to kick off what was sure to be an awesome weekend.

At one point during the workout they made us roll around on the ground. While this was a lot of fun, I should have rethought how I handled my phone during this. It must have slipped out of my pocket and I walked away from it. When it was finally returned to me I noticed I had one more picture on it than before. Like anyone who finds a lost phone it is almost mandatory to make sure you take a selfie. So to the two women who found my phone thank you for the picture, if you are reading this, here you are…..

Lose your phone, be ready for a selfie from those who found it

All I can say is I need to start doing more of these. It was such a fun time and I look forward to going to another one. If they are by your city, this is a must for sure!

I left the workout to get home and get showered because I still had the first race of the weekend, the trail run, later that day. I also wanted to make sure our BibRave meet up area (more on that later) was well stocked. So I rushed home to make sure I could food shop for the things I needed. 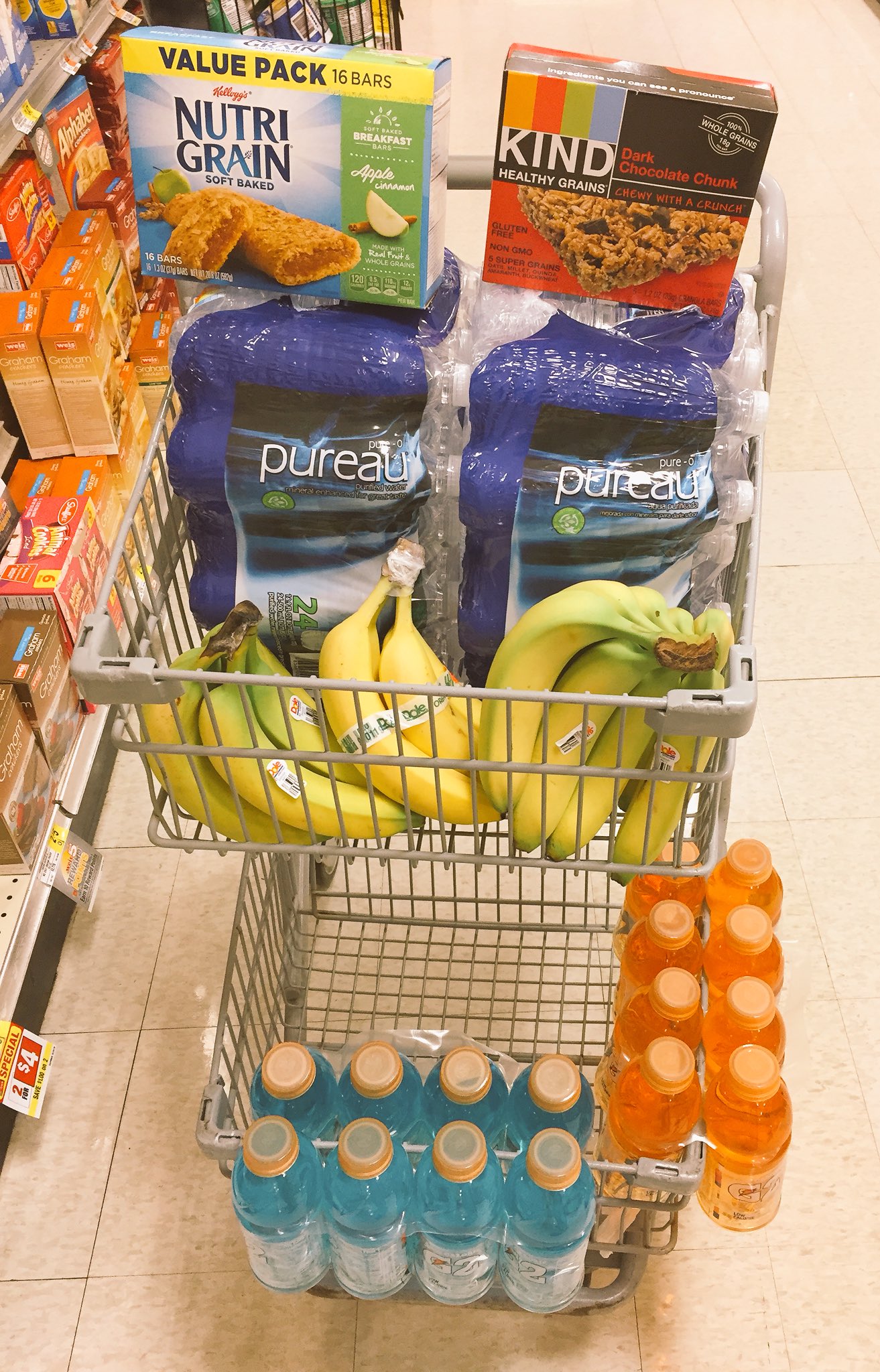 Prepping for the BibRave meet up area

Just a few hours later and it was back on the road to Bethlehem for the first race of the weekend. As I mentioned above I will not add the race recaps here but will link to them. So feel free to read my trail run review here. The trail run was a lot of fun and I got to link up with Amy, Angie and Josh once again. We waited for the master of ceremonies, Bart Yasso, to give us instructions on the race. Since the three of them were all trail running veterans they helped me calm my first time trail running nerves.

After the four of us completed the trail run we thought it would be a good idea to celebrate over a few beers (I was in full support of this). So once we finished touring the expo we headed to a local bar that was towards their hotel room. Having left the trail run area around 3:30 we didn’t end up closing the tab at the bar until about 7:30. It was a great cap to what had been a very memorable first day of the running weekend. And it was even better to learn so much more about people I only ever see over Twitter. I’m sure we could have closed the bar out that night, but with another 5:15 wake up call I needed to get home.

First trail run complete. Even got a shot with Bart Yasso

Saturday at 5:15 AM came super early. However it was time to get up and put on the running outfit of the weekend. This weekend was a weekend of races that I (among others) was running on behalf of BibRave. Since I was one of the few BibRave Pro locals, and would be coming from home, I felt responsible to make sure BibRave was well represented. So I worked with the others ahead of time to set up a meeting area for BibRave Pro’s as well as other people who were running to stop by. As a result I had to get up super early Saturday morning to make sure the meeting area was properly set up before the races began.

So as my fiancé slept in the car (I was impressed she even came with me that early) I set up the BibRave meet up location a solid 2 hours before the first race of the day, the 5K run. Again, feel free to read my 5K race review here. About a half hour before the 5K Amy, Angie and Josh made their way to the BibRave meet up area that I had set up.

The 5K came and went and it was time prep for the next run. The 10K started just an hour and half after the 5K, so no rest for the weary. You can read my 10K race review here. While the BibRave meeting area was a nice way to promote why we were there, it was even better for a rest spot for the day as well as our own personal gear check. Not that the 5K was hard, but since this was already my third activity in 24 hours I wanted to sit down and relax before heading out for another 6.2 miles.

By this time my parents, sister and brother in law made their way to the race. My sister was running the 10K and it was her first race above the 5K distance so they were there to cheer her on. This was race number 2,346,571 for me so I was old news. However, beyond just being her first 10K it was more special than that. She won a free contest through the local news to be trained for the race by Bart Yasso. It was all about a comeback story. She had torn her ACL in 2015 so this race was her redemption. I definitely suggest you check it out.

Our significant others cheering us along

After the 10K it was time to finally relax since all races for the day were over. So I headed back to the BibRave meeting area and enjoyed post race celebrations with family, friends and random strangers. Since I bought a bunch of food and drinks we invited anyone who wanted to come by the tent to grab some food and drinks. We even met a few twitter followers who are active during BibChat. And BibRave co-founder, Jess Murphy, stopped by to say hi too. She was running the half the next day (and also singing the national anthem before the race…..no big deal).

Back at temporary BibRave Runner’s World HQ with Jess and the rest of us.

We talked a while about the races we ran that day and then it was time to pack up and get home. My fiancé and I had a jam packed schedule for the rest of the day and we needed to get the non running portion of the day started.

Sunday morning was my only day of rest. If that’s what you want to call it. Instead of waking up at 5:15 I got to wake up at 6:00! 45 minutes of extra sleep! Since no meet ups were planned on Sunday it was a race I could just get to and leave. So I took the trip north for the fourth and final time for the weekend. Since my fiancé had a party to host that day she stayed home. So the plan was to take my good old time on the course since no one would be waiting for me. However my mom and sister came up that day to cheer me on. So no going on the nice and easy stroll I expected. You can read my half marathon race review here.

Crossing the finish line had never felt so good. In fact I even got a bit emotional after I did. The emotions of running four races over three days and the fumes I was running on just overcame me as soon as I slapped Bart Yasso’s hand and crossed the finish line, knowing my hard weekend had been completed.

I wrote a lengthy Facebook post about what this weekend meant to me. So I won’t get into that again. Instead I will post it below. But it is easy for me to describe this weekend as the greatest running weekend of my life. From the friends I spent time with, to my family cheering on new accomplishments to a well organized fun filled event this weekend had it all!