Disclaimer:  I received free entry to the Runner’s World Half and Festival grand slam of races as part of being a BibRave Pro. Learn more about becoming a BibRave Pro (ambassador), and check out BibRave.com to review find and write race reviews!

The 3.8 mile trail race is the first race to kick off the Runners World Half and Festival weekend. Reader be warned: this was my very first trail run. I will review this as how I experienced the run but it will be hard for me to compare it to other trail runs.

The run began about 2 miles from the main Runners World race location. As a result you had to board a shuttle before you could get to the start line. Buses were running pretty regularly so this was no issue. I got to the bib pick up and hopped on the bus. As a procrastinator I was running late but that was no issue as bib pick up was smooth and quick. No time to enjoy the expo since I was running late, but since this was a weekend festival that was no issue as there would be plenty of time later on. 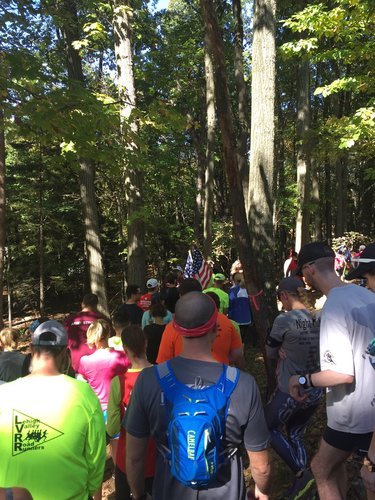 I got on the bus and was on my way to the start line, which was in a pretty well opened parking lot. Once in this parking lot I got to mingle with other runners and meet up with the rest of the BibRave pro’s running. Bart Yasso got on the microphone to give everyone a breakdown of the course. As a pure road runner this was new to me however made sense since we would go through 3.8 miles of twists and turns unlike a traditional road race.

As a first time trail runner it is easy to say this was a difficult terrain. Rocks, roots, branches, brush and everything else you would find on a trail run. However regardless that it was my first trail run it was still a lot of fun. The hills were possibly the most intense hills I have ran in my life. So much so that I could feel it in my lower back as I was trying to climb them. The course had what felt like a large amount of rocks that we had to weave through. A more experienced trail runner confirmed this for me at the end. While the course was rocky and hilly it was also very scenic and made for an enjoyable course.

The race finished in a field with spectators lining a tenth of a mile stretch. The post run was a lot of fun as well. The race had pizza’s, water and energy bars for every runner. After such a hard course you could fuel up and start the recovery process immediately. The buses to get back to the venue were just as easy to navigate. Runners had to wait a little longer for buses since we were all trying to get on at the same time but it wasn’t much of a wait. A 5 minute drive and we were back to the venue.

Overall this was a every enjoyable run. As a first time trail runner I would come back and do it again. It was very difficult and there are probably easier trail runs out there but the challenge is what made it fun.