Disclaimer:  I received free entry to the Buffalo Marathon as part of being a BibRave Pro. Learn more about becoming a BibRave Pro (ambassador), and check out BibRave.com to review find and write race reviews!

Memorial Weekend 2016 was the Buffalo Marathon (as well as Half and 5K). For me it was my first time not only running the streets of Buffalo, but being in the city itself. Overall I enjoyed my time in the city and the 26.2 miles I was able to run on their streets. 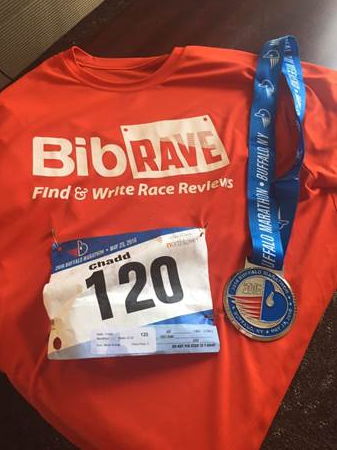 The pre-race logistics went very smoothly. The Buffalo Marathon did a great job sending emails on a regular basis to keep runners updated on everything from the expo, course conditions, local area surroundings and even the unexpected heat on the day of the race. For someone who is not very familiar with the Buffalo area this was nice to have to feel more comfortable on race day.

They also did a great job with their expo. The layout was smooth with plenty of vendors available to pick up last minute supplies. I personally purchased a few Clif shot blocks at one of the booths since I had used my last ones at my last race. There were also booths set up for you to try out some of the latest running/ fitness equipment. I wish I had tried out the elliptical that allowed the user to feel as if you were running, that looked cool! 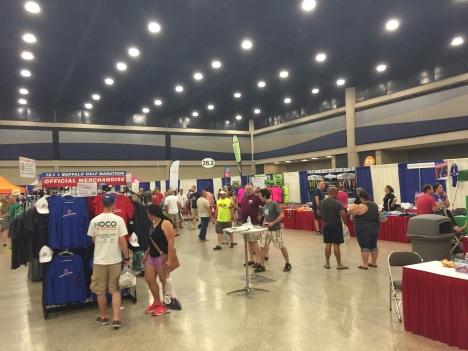 Bib pick up was very smooth. As long as you knew your bib number you could walk up and get your swag bag and leave. The bag even had the shirt in it ready to go. Most expos I go to have bib pick up and race shirt at different tables. Not that this is an inconvenience, but it was nice of the race to make this a one stop shop.

The Buffalo Marathon advertises the following on their website: “Flat and fast with one of the highest Boston qualifying percentages in the country”. While I have never (and probably will never) know what it feels like to qualify for Boston, I can see why they advertise this. To my knowledge I do not recall a major hill during the course. There were slight inclines, but no hill I can think of. And the slight inclines that started the course, were the slight inclines going the opposite direction during the middle and also end of the course. So there were times on the course where the slope helped you pick up speed and make up lost time. 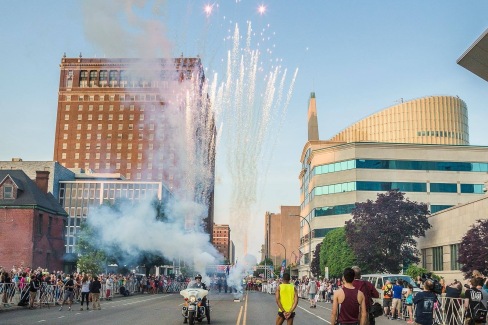 Fireworks to start the beginning of the race!

Being a runner in Philadelphia I am spoiled by spectators. When you run a race in Philly you feel like you are in the middle of a sports parade. Rarely on a Philly course will you not be surrounded by cheering spectators. This was not the case for Buffalo. There were parts of the course where spectators were out in strong numbers. However it felt like there were times where it was just the runners on the road and that was it. It got even more lonely when the marathon and half marathon split up and it was like I was running on a small Tuesday night group run instead of a city wide marathon. This is not a negative towards the course, if I didn’t run in such a large city like Philadelphia I probably wouldn’t think twice about this. But because I do it is something I noticed. Regardless I enjoyed every inch of the 26.2 mile course. 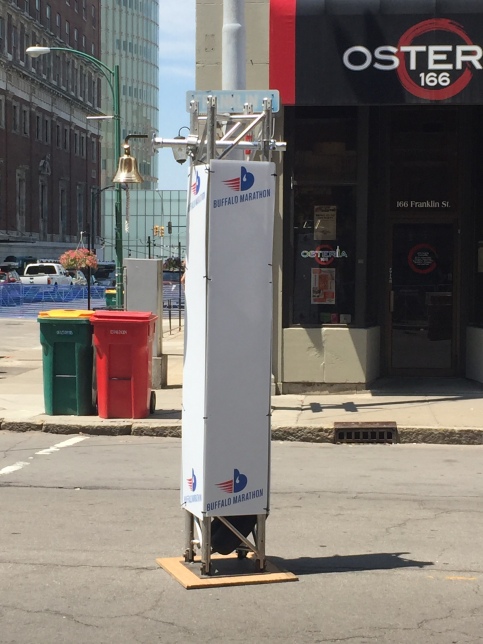 If you hit a PR you could let everyone know by ringing a bell at the finish line!

On the flip side, since Buffalo is a smaller city compared to Philadelphia there were times where I felt like I was running through a traditional suburb. You know the kind, houses and trees lining the streets with no skyscrapers to be seen for miles. That was really cool because it felt like a local neighborhood run. Residents had sprinklers turned towards the street to cool down runners as well as makeshift water stations set up. It gave it a very hometown feel that not many Philadelphia runs can compete with. 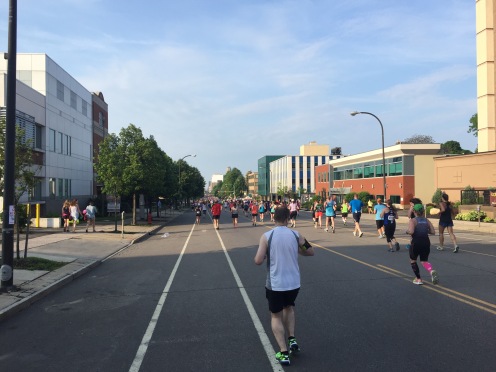 If I had a chance to sit down with the race director I would love to talk to them about one thing to improve on. And this is just something that’s personal to me. I would love to see them be more active on social media. It’s no doubt runners love being social about their activity and the Buffalo Marathon should capitalize on this. As of this writing, the latest tweet from them is from May 6th (25 days ago). As I was scanning twitter I kept seeing re-tweets from another race that I follow that was held the same day as Buffalo. It was cool seeing the experience from the eyes of all those who ran that race. On the flip side, the Buffalo Marathon twitter page stayed silent. One of the most fun things I enjoy about a big race is getting to interact with the fellow runners and see the race from their point of view. It would be nice to see Buffalo get more social in 2017.

I thoroughly enjoyed this race and am happy I ran it. It allowed me to explore a city I have never been to before in a way I normally wouldn’t have. Everything was run smoothly and there were no issues to report. If you are looking for a full marathon to put on your list I would highly recommend this one.

One thought on “Race Review: The Buffalo Marathon”