This past weekend was the Hot Chocolate 15K in Philadelphia. It was my second year running this race and overall was a great time. To be completely honest my motivation for running the race this year was purely superficial. Last year they didn’t offer a medal for the race, which I found odd considering it was a longer race that attracted a lot of runners. Usually runs over 10K’s offer some sort of race medal. And honestly I consider myself a medal chaser, I have no shame. So when I found out this year they were offering a medal, I knew I had to sign up. Plus it was a pretty cool designed medal so how could I pass it by? Check out for yourself: 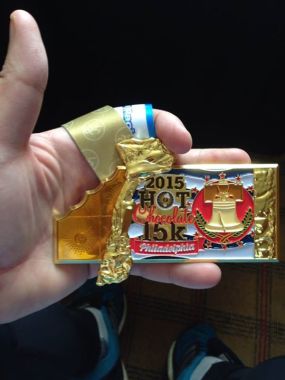 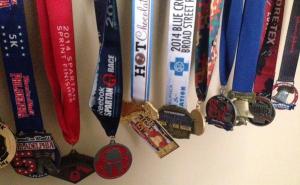 The 15K Medal Joined the Family

The day before the race I took the train to the city from work and was on my way to the expo. It was held in the traditional location for most big races in Philly, the Pennsylvania Convention Center. It is a relatively easy trip to make because the one major train station is a short walk to the convention center. I wrote about this in a previous post as well, but as someone who is coming from the suburbs it would be nice for races to push their expo times back a bit. Most expos end at 7:00 which means I have to leave work early and disrupt my work schedule to make it there on the time and catching the right train. I could drive, but the one major road (Route I-76) that connects the suburbs to Center City Philadelphia is constantly backed up, the train is just easier. The good thing is I was able to get more marathon training reading done on the train so it was a good trip: 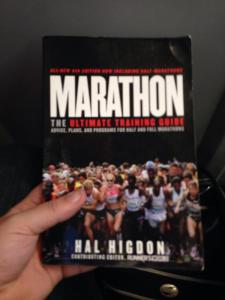 I had mixed feelings about the expo itself. Because there was a volleyball tournament happening at the convention center I believe the expo got pushed out of its normal location. Most big race expos happen in one of the main ballrooms. So I walked to those rooms and found a very large volleyball tournament going on. So as a result the race expo was held in a room that looked more like a small warehouse in the building. I am sure this wasn’t something the race organizers could help so it is hard to hold it against them, but it took away from the atmosphere of it all.

The room not withstanding, the expo was good. I was impressed with how they gave you your bib. Usually you have to stand in a specific line that is specific to 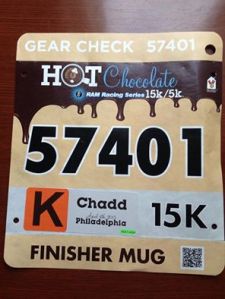 your predetermined bib number. But for this race you didn’t have a predetermined number. You gave them your confirmation code and they printed your information out right there in line. They would then take this information and stick it to either a 15K or 5K bib, depending on which race you are running. I found this interesting because it made getting your bib a lot easier. Plus you got your name on the bib which usually does not happen.

The expo was also great because they allowed you to make changes there on site. They gave away a race hoodie versus a traditional shirt. If your hoodie was not the right size you could switch it out for one that was the proper size. This was a great piece of swag because it is perfect for the spring weather. It zips up on the front and is lightweight. Last year they gave away a pull over. I use the pull over for cold running more than wearing around the house, so it was great to get a piece from them that can be used in other areas. If it was a repeat of what they gave away last year I really wouldn’t have seen much benefit. And as per usual there was a lot of different race merchants selling different products and goods. I typically don’t look around as often because I got most of what I needed during the holidays so I didn’t do much shopping. They were giving out some chocolate towards the exit of the expo so naturally I had to stop and get some of that. 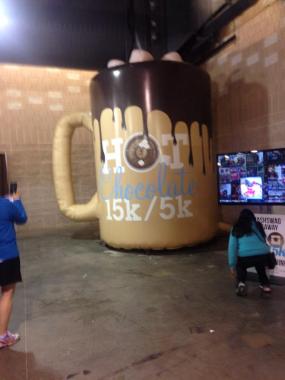 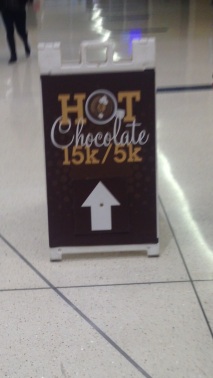 About 30 hours before the race I decided I would book a hotel for the night before the race. Once again, driving to the city from the suburbs can be difficult. And with a race this large it is even more of a headache. In addition to all this the race began at 8:00 AM, making travel on the train difficult since most trains wouldn’t leave early enough to leave time to get ready before the race start. So as a result I checked out a few last minute hotel deals and got one close to the race site for a half decent price. Overall this was a good decision because I was able to get up about 45 minutes later than I normally would have, and it was a quick 5 minute cab ride to the race. This allowed me enough pre-race time to do the normal things I need to do on race morning (I don’t have to go into details, all runners know what I’m talking about). 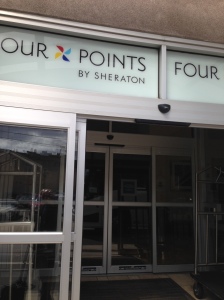 The other positive about staying in the city for the night is the ability to get a good meal in, or carbo-load as runners call it. The goal was for my girlfriend and I to eat dinner at The Reading Terminal Market. If you have never been to Philadelphia this is a place that you should make a trip for. Talk to one person from Philadelphia about this location and you’ll understand. However, unbeknownst to us this place closed at 5:00 that night. This was very disappointing. So in true tourist fashion we decided to go to the Hard Rock Cafe that was local to our hotel. I’ve always enjoyed this location so I was happy to go. Needless to say I did my fair share of carbo-loading that night: 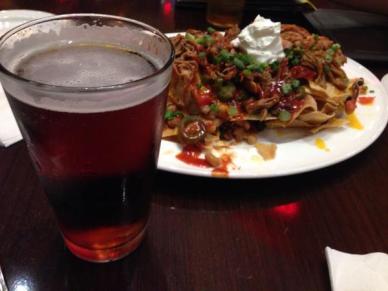 Now onto the race:

The race ran the standard river loop of Philadelphia. It’s tough to describe the course because I feel like I have described it a million times. But it was a great course overall. It followed the Schuylkill river as well as ran a bit into Center City. However this day in Philly was exceptionally windy. When I got to about mile 2 it felt like I was fighting the wind extra hard. It was coming hard off the river and was relentless. By the 3rd mile it started to slow down and wasn’t as heavy. Around mile 5 or 6 it started to pick up a bit. Luckily by the end of the race the wind was at the runners back. It was around mile 8.5/9 where I felt the wind really pick up and aid my running. It damn near felt like it pushed me to a minute per mile faster than my regular running. The end of the run was fun as usual. When running on this course the last .3 miles or so are full of spectators. It’s like running in a parade route and really helps you finish the race hard as everyone is screaming and cheering for you.

Overall the race organizers did a great job handling logistics of the race. I got through the portable toilet line in a fast manner, found my corral easily and took off with no issue. Philadelphia is a large city and this race attracts a lot of runners, so I imagine coordinating this many people is not an easy task. I found the begining of the race to be interesting because they did not have the typical Hot Chocolate race arch. You have probably seen it before, the large black arch with the marshmallow figures at the top. Instead there were just two forklifts that had their forks raised high with a banner that read “Start” held to the top. I found out later that due to the wind they could not put up their normal arch. 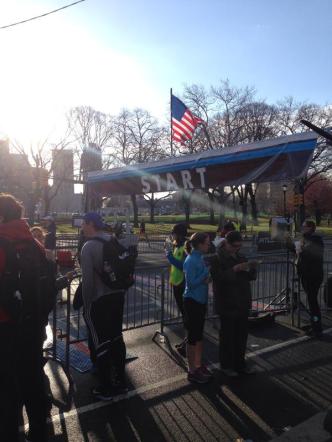 I really enjoyed this race and recommend it. The cool thing about this race is they offer a 5K option that occurs 45 minutes before the 15K. So if you aren’t comfortable with the 15K distance yet, you can run the 5K and still get a big race feel that most 5K’s do not offer. For me, getting comfortable with being around that many runners was just as hard as the miles themselves when I first pushed past the 5K race distance. Personally for me the race was great. Last week I ran the Back On My Feet 5 Miler and PR’d the 5K and 5 Mile distance. In this race I PR’d the 15K distance and was right in line with my time for the 5K. So to PR 3 distances in the past 2 weeks is an awesome feeling. It is only the first week of April and my running is really coming to form. I am getting faster and feel like for the first time ever that I am finally getting control of my running and pacing myself properly. I still have a lot of work to do before the Chicago Marathon, but to feel this confident this early on is a great feeling. 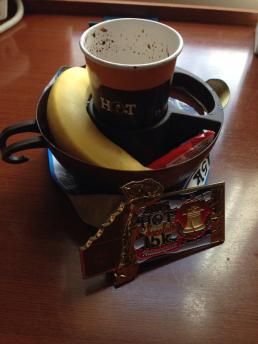 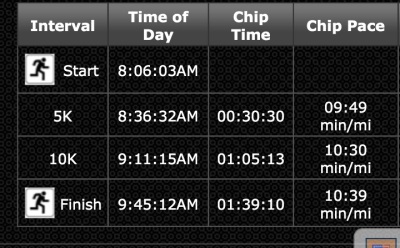 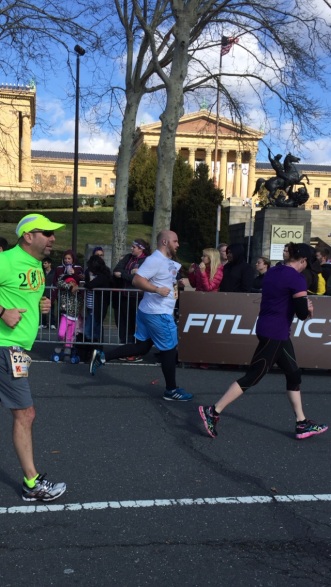 Running past the famous Art Museum and “Rocky Steps” in Philly