On Saturday 9/20 I ran the Philly Rock N Roll 5K at 8:00 in the morning, and by 10:00 AM I crossed the start line of the Spartan Race at Citizens Bank Park in South Philly. Needless to say it was a fun day.

Last year I ran the Rock N Roll Half Marathon and it was the first time I ever ran a Half Marathon. This year they introduced an inaugural 5K. I am not quite ready for a Half Marathon right now (training for one in November) so I thought the 5K would be a fun option. Honestly, for as amazing as the Half Marathon was last year the only thing left to be desired was the finisher medal. However the Rock N Roll 5K medal this year looked a lot better so I felt it was worth the run. And truth be told I run a lot of races for the medals. Call it what you will, I make no apologies about it.

This year I decided I would run the Spartan Race. As I have written before I really like trying out new races so when I found out they were running a Spartan in Philly I knew I had to sign up. I also saw that the Philly Rock N Roll 5K was that morning. So I made the decision I was going to run both races. The 5K started at 8:00 and I signed up for the 10:00 wave of the Spartan Race, so I figured no problem.

It was a lot of fun. It was the day before the Half Marathon so the course was prepped for the thousands of people who would be running the Half Marathon however only 2,500 ran the 5K. So it wasn’t too crowded and there was plenty of room on the course. Also the portable toilets we’re set up to handle 10’s of thousands of runners. I don’t think I need to tell a runner how this was a positive impact for a race that had not even 3,000 people.

The course was an out and back so it was good to see the people who started earlier than you running towards you and cheering everyone on. Also a state record was set for the fastest 5K run in Pennsylvania ever. Cool to be a part of  running history.

Overall they did a great job with the run. This was to be expected as they were handling the Half Marathon the next day so setting up a 5K should have, and was, a simple process.

Next, to the Spartan Race….

I finished the 5K, met up with my girlfriend and got out of there without really waiting around. I never really feel the need to take in post 5K celebrations. Not that I do not enjoy them, but just give me my water bottle and let me head home. So her and I left there and headed to our next stop. My first race was in Center City Philadelphia and my next one was South Philadelphia, so a quick ride on the Subway and we were there.

The Spartan Race was a lot of fun. They set the course up at Citizens Bank Park where the Phillies play. So there was tons of running up stairs, through stadium seats and more. We even got on the field to do some obstacles in the clubhouse!

The race itself is probably one of the most difficult runs I have done so far. I have run a triathlon, duathlon and a few half marathons but this one included a lot more than just running. There was so many more obstacles to fight through that caused additional fatigue.

Overall it was really cool to run through the stadium like that. As a sports fan I have been to the stadium a bunch of times however never like that. So the race itself was a lot of fun and organized very well.

So there you have it, my first ever two-a-day organized race day. I pushed myself hard that day and kicked my butt. And I would do it again in a heart beat. 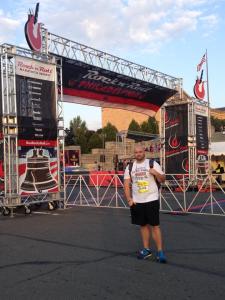 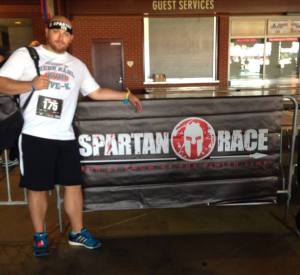 My girlfriend, my amazing support sysetm. Got up early with me, carried my racing gear around and traveled all over the city with me. I am a lucky guy 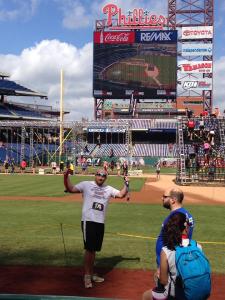