This past weekend was The Philly 10K. It was the first annual race. Let me tell you why this is a big deal to Philadelphians. Overall Philadelphia has great running scenery. However unfortunately a major part of that is not used in large runs like this because the cost of shutting down the city is too high. So a majority of races in Philadelphia are held in one specific area (referred to as the River Loop). The River Loop is beautiful but if you have been running for a while in Philly it all starts to become the same.

If you have seen the movie Rocky you will know what I am talking about. The Italian Market, South St, Pats & Geno’s and more historic areas were all a part of the scenery. Again, areas that major Philadelphia runs do not take place. Because of this, The Philly 10K was a big deal to local runners.

Along with all of this, the race itself was also pretty exclusive. I believe the organizers capped the race to only 3,000 people. As someone who was a part of the race day sign up frenzy (server crashes, website crashes, people not being able to get in, etc.) I can tell you getting a bib to this run was hard. So it had a bit of an exclusivity feel to it.

Overall the race was great. As I mentioned earlier the sights and sounds were brand new to large, organized runs in Philadelphia. From Pats and Genos, to Isgro’s Bakery, Sabrina’s Cafe, The Italian Market, South Street, Broad street and so much more! You really got a truly different view of running through the city.

The race was hosted by Philadelphia Runner (the premire running company in Philadelphia) and they did a great job with organization of the event. Unfortunately I did not make it to the race expo so I cannot comment on that, however the race day itself was very easy and seamless. My group was expected to start running at 7:45 (about 15 minutes after the start) and I believe we officially left 5 minutes early. So there was no delay in getting  3,000 runners going at the right time.

The swag itself was great as well. Instead of a medal for this race you were given a hand drawn map of the course as well as notable Philadelphia business along the course. It is a very well done race prize (pictured below) that can be framed and hung for display. The shirt itself is also very nice with a list of all the surrounding neighborhoods around the logo.

After the race you could get a free treat from two Philadelphia staples, Shake Shack and a beer made just specifically for this event by Philadelphia Brewing. As someone who enjoyed the beer I can tell you it was a perfect treat after the finish.

Now for what could have been better…..

The weather was tough. It was about 85 degrees at the 7:30 AM start time. Nothing the organizers could do about it, but it made for a very difficult run. And unfortunately they only had 2 water stops on the course. I am not sure if they made this decision with the heat in mind, but 2 more stops would have been nice.

Transportation was also a bit of a problem. Since South Philly is packed with tight streets parking for large events is next to impossible. So for runners who were coming from outside of the city it was up to them to make arrangements on how to get down there. Now the good thing is Philly has a subway that runs the entire length of the city with trains departing about every 15 minutes. However to get to them you had to drive down early to make it on time. Anytime a run is done in an area that is difficult to get to, the race organizers usually work with the public transportation company to plan logistics. The Philly 10K did not do this. probably something to think about for next year.

Overall it was a fantastic run. If you are a runner in Philadelphia and you did not run this you really did miss out. Of course the good thing is I believe they will do it again next year (although this has not officially been announced). So if you run in Philadelphia, or have ever wanted to run in Philadelphia, this race should jump right up to the top of the list.

Photo’s below that recapped my race experience. Unfortunately I went down to this run alone and my smart phone is broken so I was unable to get any race day photo’s.

Famous Pat’s Steaks as the runners run by 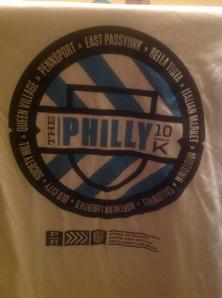 This is the reward Philadelphia Parking Authority gives you when your meter expires. Like I said, tough to get parking.

The map given at the end of the run.